We’ve recently interviewed our very own rock star, Ady Heyn who is a driver based at our Wrexham depot.

Ady, how did you start in music?

When I was in school I was really into my music, and took an interest in playing the guitar, bought self tuition books and practised daily in my bedroom. 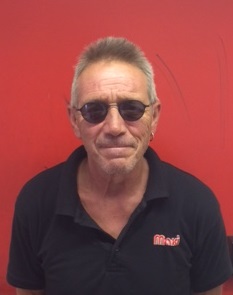 I bought a Fender Precision Bass guitar from Hessey’s Liverpool in 1976 for £225 which was a lot of money, and I still use this guitar today.

In 1976 I formed a band called Mantrix with my brother Phil as lead vocalist, and put an ad in the local paper for a guitarist and a drummer.

Once we found these we started doing gigs performing a mixture of covers and own material in holiday camps in North Wales.

In 1977 I was approached to audition for a group called The Damned, but I couldn’t go as I was about to get married, my life path could have been very different, probably dead!

We sacked the extra members in 1978 and replaced them with more like minded people and reformed the band as Terminal.

We then continued to tour all over the UK 6/7 nights a week performing our own material, including a month long tour with a band from London called the Pink Fairies who had a large following at the time.

In 1979 we signed a deal with Cargo records and released a single called “Hold On” which John Peel at Radio 1 played as his record of the week.

We gigged extensively all over the country from the success of this single and then released a further track called “Am I Doing it Right” on our own label Termite records in 1980 which was banned by the BBC due to explicit lyrics.

From 1986 to 1990 I played with a band from Detroit, USA called the “Dung Beetles” who had quite a large following in the states.

As part of Terminal  we continued to tour extensively until 2000 and then occasional gigs ever since.

Any famous people you have supported?

We performed at Julian Lennon’s birthday party at his request just after his father died, Cynthia Lennon was at the party.

Performed regularly with T’Pau, and Carol Decker was a good friend at the time.

Performed with The Stranglers.

Performed with Gary Glitter (not sure that’s a good thing to admit!)

Performed with the Blockheads original line up bar Ian Dury who had passed away at this point.

Can you explain the buzz of a gig?

There is nothing quite like the buzz of a gig especially when playing to an appreciative crowd, the camaraderie with the band was special, and still to this day, three of the 4 members of Terminal still perform when we have time, memories that will last forever!

Our original studio and live recordings are on youtube under Terminal Wrexham, some great footage.

If you could perform with any band who would it be and why?

I would have loved to have performed with Squeeze (Jools Holland) as their songwriting is superb.