Debbie Lorimer, who works in our Head Office Central Pricing Department in Irvine, has recently completed a charity trek to Mount Everest.  The following is Debbie’s account of the trip.

I have recently returned from climbing to Mount Everest Base Camp.

Firstly, let me tell you how the trip came about, my sister phoned me to ask if I wanted to participate in raising money for Glasgow’s Children hospital, her friend’s son was receiving treatment there. I asked what she had in mind and was told she fancied walking the Great Wall of China or something like that, we agreed on dates and I left the rest to my sister.

A few weeks later I found out what the “something like that was” she had booked our trip…………. she had changed her mind and decided climbing to Everest Base camp was a more interesting option.

What choice did I have? NONE.

Even though I spent hours researching and over a year training for the event, NOTHING and I mean NOTHING at all could have prepared me for this experience.

After more research I decided to go shopping for the equipment I required .The most obvious was a decent jacket and boots. How hard could this be ….Just ask for a jacket to climb Everest. Well after a great shopping session in TK Max I was sure I was ready and proudly showed off my trespass jacket to my partner. Much to my shock my partner who is an ex fire fighter and search and rescue specialists just looked at me in disbelief. “A trespass jacket he said “looking at the jacket horrified. The same looks were given to my mountain warehouse boots. He just said one word. “Unbelievable “

So my partner took me shopping for real life saving gear.

Before I left my partner bought me a top of the range mountaineering jacket, I said “I think that’s a bit over the top, it’s not going to be that cold”, he insisted that I wear it when I get nearer the top where the average daytime temperatures were -36oC and can drop easily to minus -76oC. Within ten minutes of landing, the jacket was out the bag and on, never to be taken off again until we arrived back at the bottom.

We arrived at Lukla airport and luckily my sister did not tell me it was the No1 most difficult runway in the world to land at, until we were up in the air. The runway at Lukla is short and I mean short, it’s like a tiny car park. To make it worse it’s on the side of a mountain with the planes needing to land on a hill. At the end of this tiny runway are houses and I mean the houses are built right on the end of the runway. To make it even scarier for a bad flier to my horror on the approach the runway is littered with crashed aircraft which didn’t make it.

As we would need to carry all our luggage throughout the trip it was recommended that we take no more than 10kg in our ruck sacks, no problem for my sister as she jumped up and down on her ruck sack to ensure she squeezed everything in. However, a record for myself, this is the first time I have been underweight at any airport.

This was where we met out guide for our trip, Borat, no he was not like the Borat from the film before you ask. Borat explained we would start at a leisurely pace, “little bit up and a little bit down”. We reached an elevation of 2610 M.

I quickly realised that no toilet/shower facilities existed anywhere on the mountain and I will never forget how much 10kg weighs.

On day 3 we got our first glimpse of Everest through the clouds, which gradually opened up to give us a magnificent view. Glad of the cloud cover we continue through 3000m to an eventual altitude of 3440m. The air is getting thinner and the road to Namche Bazzar just seems to be endless. Again “the path is little bit up and little bit down”. The views are just simply stunning. To put this into perspective, here in the UK our highest mountains are only around 1000 m. 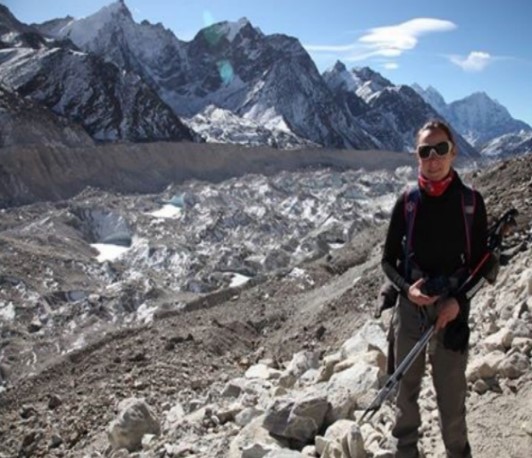 We have rest days so we can adjust to the altitude. We are told to eat as many calories as we can to help for the following days. Easier said than done, the rice, porridge, eggs and potatoes just don’t seem to have any taste at all.

After another poor nights rest we continued with the Trek to the Monastery, “a little bit up and little bit down”. Very confused today as it was only up up up, the steepest hills I have ever seen in my life, there was no air at all and every step required so much effort. But onwards and up-wards we went with lots of break stops required today. We eventually reached the Monastery just in time for the Monks service, I certainly said some prayers of my own. Tonight was a treat, no tents required, we stayed in the Monks lodge. We had now reached 3860m and temperatures during the day were -4oC.

Today we passed through the 4000m barrier, food getting worse and worse from what we can taste. The local delicacy was garlic soup which we were told helps improve the blood flow and breathing, trust me, anything was worth a try.

We try to have a sleep in, impossible due to the ice inside of the tent.  Temperatures now at -50oC, every breath requires so much effort. It feels like someone is actually sitting on us. Today was not a great day for me, it was the start of altitude sickness, what I did not know was that it would not go away until we started heading down the mountain. Today was the day I had to ask “why did you sign us up for this”, however if you ask my sister she will tell you I did not put it as politely as that. Still no appetite but magically found a Mars Bar which I did not share.

Today we reach 4910m, “a little up, a little down” until we head to a steeper climb to reach the memorial for the Sherpas and climbers at Lobouche. We stop for some pictures and admire the gravestones and the always present flags around these mountains. By now the temperatures are -55oC, tonight it is so so cold we had to ask the Sherpa for more Yak’s dung for the fire as we could not sleep. Yes this is how they fuel the fire, you either smell of sweat after not washing for so long or Yak’s poo. By now we had decided the yak’s poo was the better option.

Day 13 – Another Day another headache

We continue on, this is our final day before basecamp. Lots more garlic soup involved morning, noon and night.

After breakfast, more garlic soup and we set off for basecamp. On the plus side our back packs are light as we are wearing every single piece of clothing and I am still the coldest I have ever been. At 5380 m and -57oC taking the smallest step required so much effort, this coupled with the fact that there was so little oxygen made every step impossible. Well not going to lie, today we had to crawl up some of the mountain. The trail was such a steep climb. Then heading over the glacier towards the camp and apart from a ¾ trek along the ridge on top of a hill, it is a seriously difficult walk. The glacier is very difficult to move along due to the uneven-ness of the terrain.

Was it tears of joy or relief when we made it to base camp, I did not care I was so elated at arriving at our destination and still could not believe we had made it. This now meant it was the return journey what faced us, the chill factor of the wind, we needed to up our speed as the sun was setting and it was far too dangerous to trek in the dark.

What better way to celebrate than garlic soup, Mars bars and some Yaks poo for the fire. We had to get up close to the fire tonight to try and defrost us. My sister was told twice by the Sherpa she was too close to the fire, however did she listen? The next minute all you see is the white feathers flying everywhere, her jacket had burned. Not to worry we had our masking tape to patch it up. 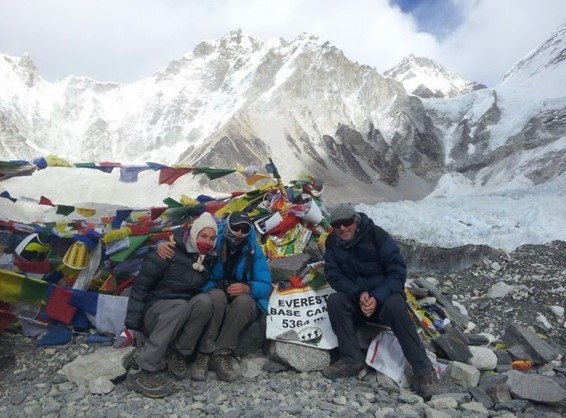 No headaches and big smiles.

The only problem was the blisters but nothing some masking tape could not solve.

This was more like it, downhill all the way to the river. We could see our destination for miles. After some time we asked “how far now Borat – 20 minutes?” The answer was 2 ½ hours, appearances can be deceiving. We would eventually arrive at Pariche.

After 5 days of “a little up, a little down” we made it back to Lukla. We stayed in a nice little tea hut and was promised it had hot water but just as we checked in there was a power cut which continued until we checked out the following morning. We then got our flight back to Kathmandu with big smiles on our faces.

Three days later I arrived back at Glasgow airport, Douglas my partner did not recognise me at first and kept asking “are you ok, you look dreadful, are you sure you are not ill”?

I am very proud to say we raised over £2000 for the hospital.

Without a doubt this has been the most difficult thing I have ever done and by far my biggest achievement to date.

Would I do it again? I will never step foot on that mountain again. I have the deepest admiration for the few who have climbed to the top and respect to the climbers and Sherpas whom have fallen. It’s the most beautiful place on earth but equally hell on earth. Mars bars and duct tape are a must.