Congratulations to Andy McGuire on reaching the milestone of 25 years’ service.

Having spent 5 years in the Royal Navy on discharge, Andy became an HGV truck driver. Based in Warwick, he joined Maxi Haulage as a driver in 1995 and has now completed 25 years’ service and was recently presented with a gold watch. 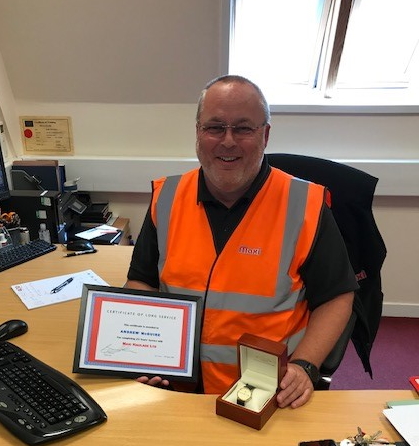 After 5 years driving he transferred to a staff position as a traffic planner and worked his way up through the Traffic Office functions and had a spell in business development before being promoted to a Contract Manager position then a General Manger role.  In 2017 Andy took up position in charge of national fleet management which involves all aspects of the fleet provision including maintenance, compliance functions and fleet specification, purchase and disposal.