We were able to have a chat with Daniel Fairhurst who is based in Warrington, I was able to ask him a questions about one of his hobbies, Rugby. 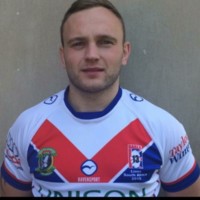 What or who made initially gain an interest in Rugby?

“My Uncle played for both St. Helens and Great Britain in the late 70’s early 80’s and my Dad also played a bit when he was younger, so it was always in the family. My Dad also coached my local amateur team so I didn’t really have a choice!

How long have you had an interest in and played rugby for?

“I played my first ever game at the age of just 5 years, I have played ever since so just over 25 years”

What has been your biggest achievement since you have started playing Rugby?

“My biggest achievement is being picked to represent an amateur Great Britain side and tour South Africa for 2 weeks in 2015. I have also represented my local town team and Lancashire”

What has been your biggest regret or downfall as a result of playing rugby?

“I suppose the biggest downfall from playing rugby is the delusions it can provide. As a teenager playing in the youth academy for St. Helens, I always thought I would go on to play professionally and make my living that way.

As a result, this I neglected school with being more focused on training. When I left Saints at the age of 21 I didn’t have many qualifications to fall back on”

What have you learnt about yourself from playing rugby?

“Playing rugby has taught me to work as part of a team which I think is a valuable life lesson, particularly in an industry like this, It has also taught me that if you want to succeed at anything you, you need to be patient, disciplined and most of all work hard”

Do you have any regrets or would have done anything differently?